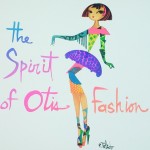 Recently, I had an audition at Otis parson school of design. It was for modeling, so the audition process was really fun and that is what I’ll be telling you about today.

When we got there, the audition was supposed to end at 3:00 and we got there at 2:59. Yikes, right! After we walked into the room, the guy said, “I remember you! I picked your headshot; adorable!” I was glad he said that because we weren’t even sure if I was going to be able to audition given our arrival time. After that, a woman walked in and said, “Have her try the one that no one fit into.” When she said that, the guy picked up an outfit and handed it to me. There was a small room guarded by curtains that he signaled me to go inside and change. The outfit fit perfectly! I think that that was a good thing because remember how earlier I told you what the woman said about how it was the outfit that know else fit into. Well, it fit me! 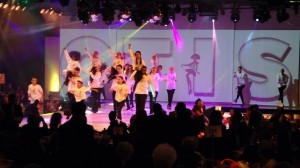 After that part of the audition, I put my own clothes back on, and I had to freestyle to Happy, by Pharell. It seems like every audition I’ve gone to lately has always been to that song. It’s super weird! I felt really good about it and the casting director seemed happy.

A few days later my mom got a call from my agent saying that I got the job! I was sort of expecting it because the casting director seemed really pleased with my audition. I was excited that I did get the job, but if I didn’t I would still be happy because I knew that I did the best I could. This is one of those occasions when I feel really lucky being fun sized.

After about two weeks I had the fitting for the job. It was a little bit weird because they just gave me the outfit and I had to undress in front of everyone in the room! After I put it on, they had me improv to Happy, by Pharell, again. As you can see, I’m getting a little sick of that song. I hear it basically every single day, but anyway back to the point. I improvd and then they made a few modifications to my outfit like put a pin here, tuck this in there, stuff like that. That was actually one of my favorite parts because I felt like a real life runway model! Then, once they made the modifications, I had to improv again. That was pretty much it! The whole fitting really only lasted roughly 10 minutes! But the whole thing was super fun and a great experience.

Two Thursdays later, I had my first rehearsal. I found out that the choreographer was Jackie Sleight, one of my favorite teachers at, as well as the owner of L.A. Dance Magic, a popular convention/competition I went to earlier in the year. The rehearsal was 5 hours long! We started at 1:00 in the afternoon and went until 6:00 p. m. First, we learned a big piece of the choreography and then had a break. Next, once the break was over, we learned another large chunk of it which was the part where we model the clothes for Under Armour, the sponsored brand. After that, we were pretty much done with all of the choreography and we just got to run it and get it in our minds better. The next day, we had another rehearsal but on the actual stage that we would be performing on. We did basically the same thing as the previous day, except it was on stage and the rehearsal was shorter. We also got to have some delicious food provided by the hotel the event was at.

Finally, the next day, we had the show! There were two shows, one in the afternoon and one at night. The night one was for some very important people like famous designers and photographers. In our preparation for the show, we had a few of the students that designed our outfits in the room with us, helping us get dressed and keeping us in order. They were really nice. I was so excited before we went on stage but I was also a little nervous. Once we went on, I felt this big boost of adrenaline and the show was great. The second show was just as great, except better! After both shows, I went swimming with two of my friends that also did the show, Hannah and Hayden. We had a bunch of fun in the pool, and then we had a delicious dinner.

The whole experience was super fun because of all the friends I made, the amazing designers, and of course, my loving parents.

Here is the video from the fashion show. I am at about the 22 second mark.