Sean Lew and the Best Boys Ever

Home » Sean Lew and the Best Boys Ever

There was a time when I was 8 or 9 years old when DPAC when to visit our sister studio in LA, Dellos Performing Arts. I met Sean Lew on Instagram for the first time. He is a year older than me and one of the best male dancers in the world. Sean and I were also both privately trained by Mr. Marco Cruz for years. Over time, I ran into Sean a lot at The Pulse on Tour and other conventions. We also often got calls for the same auditions and worked together from time to time, including The Voice. He and I are also teammates on #immaBEAST with Will Adams. 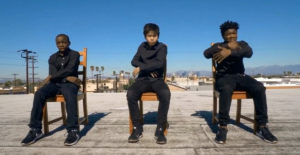 The dance industry is mostly competitive and cutthroat. But, there are a few enlightened kids that understand that is wrong. Sean is one of those. When I would travel by myself to train at conventions, I was alone and surrounded by kids that were there with their studios. Very few kids would go out of their way to make friends. Everywhere I have ever seen Sean, he has always been my friend and looked after me. I don’t have an older brother, but I imagine that if I did, he would be a lot like Sean.

There was a time a few years ago when Sean started choreographing his own solos. People had their opinion about Sean, some believing that he was too big for his britches. They were so wrong. Sean was born to dance and born to be a choreographer. His work is so good that he gave up competition after winning everything. As you will see from the video – his work is epic.

Today, Sean dropped one of the most amazing videos. Sean choreographed this trio with Bill Will Simmons and Josh Price. The three of them are easily in the top 10 dancers in America today and all #immaBEAST team members. These boys are the greatest and this video is sooooo good.

Watch this video and remember, “sharing is caring!” Share it on your social media so the world can see how talented these guys are!

just posted a throwback concept video to my YT wit