View Sparkles Lund on Dancing With the Stars

Home » View Sparkles Lund on Dancing With the Stars

Oh my gosh, I am so thankful for the outpouring of well wishes for my television debut on Dancing With The Stars #dwts. Below is the video of our act, choreographed by Mandy Moore. If you read this blog, you will know that it all started with my best friend Camille’s mom, Maureen Cattaneo getting me to the audition when my parents were out of town. Had it not been for her help, none of this would have happened. I was also thrilled to be able to meet so many new friends during the shoot and am especially grateful for ABC and The New Annie Movie with their star Quvenzhane Wallis. Our excitement to be on national TV must be nothing compared to her excitment to be a star in a movie. Someday? Ya never know?

Here is the video from last night’s episode of Dancing With The Stars for those who missed it or want to watch it again!

Here is the press release that went out today

11-YEAR OLD DANCER PERFORMS ON “DANCING WITH THE STARS” FINALE

Moore is best known for “So You Think You Can Dance,” nominated for Emmy Awards for the show in 2007 and 2011. She also choreographed several seasons of “American Idol,” “America’s Got Talent,” “Dancing with the Stars,” and U.K.’s “Strictly Come Dancing.” Sparkles Lund’s performance celebrated the new, contemporary spin on the classic show “Annie,” due in movie theaters December 19th.

“It was incredibly exciting to be part of the most popular show on television,” said Sparkles Lund about her experience on “Dancing with the Stars.” She spent five consecutive rehearsal days that began at 8 o’clock in the morning and ended at 5:00 p.m. On meeting Wallis, also 11-years-old, Sparkles Lund said, “She’s really fun to work with. She’s very professional, but really full of energy.”

An award winning featured dancer, actor and model, Sparkles Lund is fast becoming one of the entertainment industry’s hottest young commercial dancers. She is a member of the renowned immaBEAST Dance Company and has performed nationally for Macy’s and Hello Kitty brands. Her dance styles include jazz, ballet, tap, hip-hop, lyrical, contemporary and pointe.

Next up for Sparkles Lund: Top choreographer Liz Imperio, a major director and choreographer in the entertainment industry, including the staging and choreography for Jennifer Lopez’s “Live From Puerto Rico” concert; director/choreographer of Gloria Estefan’s most recent concert tour; and three numbers for Madonna’s “Re-invention Tour 2004″, chose her to be on the Hollywood Vibe’s Vibe Dance Company, and Sparkles Lund will be part of its national tour.

A resident of California’s Central Coast living in Arroyo Grande outside of San Luis Obispo, Sparkles Lund has won several national dance competitions. She also appears in “Just Dance Kids” video game and is in the CBS Comedy Series, “The Millers.”

Sparkles Lund is an 11-year-old dancer, actor, blogger and YouTube personality. She started dancing when she was 3 years old and began her professional dancing career at age 8. Sparkles Lund won a national competition as “Dancer of the Year” at the age of 9. She recently toured nationally with Macy’s Glamorama, promoting its Hello Kitty line, chosen from 500 professional dancers who auditioned. Featuring pop artist Jason Derulo, Sparkles was part of a three-city tour this summer that raised funds for Children’s Cancer Research Fund in Minneapolis, Chicago and San Francisco. Sparkles Lund is part of the renowned Hip Hop crew, lilBEASTS, with the highly talented choreographer and director Will Adams “Willdabeast.”

Alexandra Lund was given the stage name “Sparkles” at a dance camp by choreographer Tahirih Ellison, as a tribute to both her taste in outfits and her personality. She is a dancer with Dellos Performing Arts Center in Arroyo Grande, which is recognized as among the top studios in America, where she is under the guidance of Johnna Clark. Sparkles Lund is represented by Clear Talent Agency in Los Angeles. 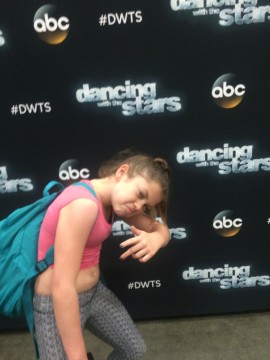