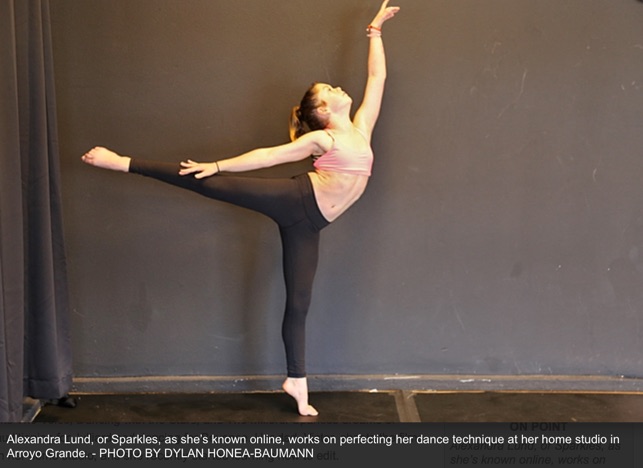 Shout Out To The New Times

By Alexandra Lund | press | No Comments …….That moment when you look at the newspaper and find an article about yourself it it….

A BIG SHOUT OUT TO Ryah Cooley, the Arts Editor for the New Times. Ryah and her photographer Dylan Honea-Baumann came out to the SparkLab studio between Christmas and New Years Day to watch me train and to interview me for an article that came out today.

A few years ago, being interviewed for a newspaper article was nerve racking. Now that I have gotten the hang of it, it is really fun. Part of the fun is never knowing what they choose to write about.

I am really happy with how the article turned out. I think that Ms. Cooley did a great job of telling the story that I am just like every other kid – going to school and practicing my sport.  In dance, you do not have friday night lights, you have performances that sometimes, if you are lucky, make it to television. Short of that, I love putting videos on YouTube and it is fulfilling to watch my art engage so many people. Last month my videos hit over 1500 hours of viewing! That is just crazy.

Thank you New Times and thank everyone who pays attention to what I am doing. It is great to have so much support.

Check out the article http://www.newtimesslo.com/art/13285/cyberfamous-teen-dancer-from-arroyo-grande-hits-1-million-views-on-youtube/ 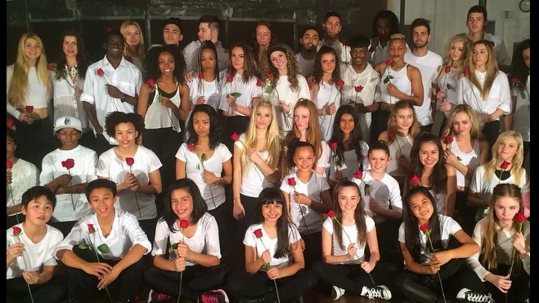 If you follow me on Instagram, YouTube, Twitter, or Facebook (links at the top of the page)  you probably already know that I am blessed to be on a team called immaBEAST. Well, specifically the “imma”s are the older kids and young adults. Part of the immaBEAST team are the lilBEASTS (15 and under), and that’s me. The good news is that there will be a workshop that starts July 28th. On the final day, August 1st, everyone gets to audition for a spot on the immaBEAST team! You can get discounted tickets for the buildaBEAST workshop and immaBEAST auditon now if you buy them before they sell out! $400 earlybird special http://www.immabeast.co/buildabeast

Over the past year, training with the immaBEAST team has been really fun and amazingly rewarding. I have had the opportunity to train on a team that is 100% professional dancers. Everyone is freakishly talented.

In 2013-14 I took some classes with Will WilldaBEAST Adams at Millennium, The Pulse, and 24-7 Dance. He called me out to do a duet at 24-7 which my dad recorded. It is really poor quality video (https://youtu.be/11b11nbtd88) but you can see that I was super inspired by the choreography. At the time, I felt really confident with my skills in Jazz and Musical Theater, but understood that I needed a lot more work on other styles including Hip-Hop. There is something about WilldaBEAST’s style of sharp footwork and hard hits blended with moments of smooth swag that I truly love. Anyways, after the class he told me about the audition to try out for his team. I was so excited that I almost peed my pants.

I had been a professional dancer for a couple of years before the WilldaBEAST audition. I was used to going to big auditions with hundreds of people and young superstars. Don’t get me wrong. When I show up to these things and see dancers like Leah Roga, Boogie Tinay, Sophia Jahadhmy, Kaycee Rice, Jordyn Jones, Larsen Thompson, Soni Bringas, and so on, I know that I gotta bring it! But the WilldaBEAST audition was a whole new level. The talent level was so deep that even a great dancer could easily drown. WilldaBEAST says that 2400 people auditioned! Here is a video that recaps last year’s audtion https://youtu.be/z1dwkFL0EbY The Journey – We do this just because we can! Being on immaBEAST is a blessing. Will is one of the most humble, hard working, generous, and genuine people I have ever met. He surrounds himself with people that are not only talented, but have big hearts. The team is really a family of people who help each other and I have made friendships that I expect to span a lifetime.

No matter where I go – a convention, a competition, an audition, or even a class in LA, I am bound to run into another member of the immaBEAST family.

I hope that you can make it to the #buildaBEAST event. Again, be sure to get your tickets right away. It will sell out fast.

View Sparkles Lund on Dancing With the Stars

By Alexandra Lund | Work | No Comments

Oh my gosh, I am so thankful for the outpouring of well wishes for my television debut on Dancing With The Stars #dwts. Below is the video of our act, choreographed by Mandy Moore. If you read this blog, you will know that it all started with my best friend Camille’s mom, Maureen Cattaneo getting me to the audition when my parents were out of town. Had it not been for her help, none of this would have happened. I was also thrilled to be able to meet so many new friends during the shoot and am especially grateful for ABC and The New Annie Movie with their star Quvenzhane Wallis. Our excitement to be on national TV must be nothing compared to her excitment to be a star in a movie. Someday? Ya never know?

Here is the video from last night’s episode of Dancing With The Stars for those who missed it or want to watch it again!

Here is the press release that went out today

11-YEAR OLD DANCER PERFORMS ON “DANCING WITH THE STARS” FINALE

Moore is best known for “So You Think You Can Dance,” nominated for Emmy Awards for the show in 2007 and 2011. She also choreographed several seasons of “American Idol,” “America’s Got Talent,” “Dancing with the Stars,” and U.K.’s “Strictly Come Dancing.” Sparkles Lund’s performance celebrated the new, contemporary spin on the classic show “Annie,” due in movie theaters December 19th.

“It was incredibly exciting to be part of the most popular show on television,” said Sparkles Lund about her experience on “Dancing with the Stars.” She spent five consecutive rehearsal days that began at 8 o’clock in the morning and ended at 5:00 p.m. On meeting Wallis, also 11-years-old, Sparkles Lund said, “She’s really fun to work with. She’s very professional, but really full of energy.”

An award winning featured dancer, actor and model, Sparkles Lund is fast becoming one of the entertainment industry’s hottest young commercial dancers. She is a member of the renowned immaBEAST Dance Company and has performed nationally for Macy’s and Hello Kitty brands. Her dance styles include jazz, ballet, tap, hip-hop, lyrical, contemporary and pointe.

Next up for Sparkles Lund: Top choreographer Liz Imperio, a major director and choreographer in the entertainment industry, including the staging and choreography for Jennifer Lopez’s “Live From Puerto Rico” concert; director/choreographer of Gloria Estefan’s most recent concert tour; and three numbers for Madonna’s “Re-invention Tour 2004″, chose her to be on the Hollywood Vibe’s Vibe Dance Company, and Sparkles Lund will be part of its national tour.

A resident of California’s Central Coast living in Arroyo Grande outside of San Luis Obispo, Sparkles Lund has won several national dance competitions. She also appears in “Just Dance Kids” video game and is in the CBS Comedy Series, “The Millers.”

Sparkles Lund is an 11-year-old dancer, actor, blogger and YouTube personality. She started dancing when she was 3 years old and began her professional dancing career at age 8. Sparkles Lund won a national competition as “Dancer of the Year” at the age of 9. She recently toured nationally with Macy’s Glamorama, promoting its Hello Kitty line, chosen from 500 professional dancers who auditioned. Featuring pop artist Jason Derulo, Sparkles was part of a three-city tour this summer that raised funds for Children’s Cancer Research Fund in Minneapolis, Chicago and San Francisco. Sparkles Lund is part of the renowned Hip Hop crew, lilBEASTS, with the highly talented choreographer and director Will Adams “Willdabeast.”

Alexandra Lund was given the stage name “Sparkles” at a dance camp by choreographer Tahirih Ellison, as a tribute to both her taste in outfits and her personality. She is a dancer with Dellos Performing Arts Center in Arroyo Grande, which is recognized as among the top studios in America, where she is under the guidance of Johnna Clark. Sparkles Lund is represented by Clear Talent Agency in Los Angeles. I Will Be On Dancing With The Stars

I booked the most exciting job ever last week, a group dance role on Dancing With The Stars! I auditioned last Thursday, and within a matter of days, I was on set at CBS. The audition combo was very short, but it was full of energy and I loved to do it. The audition was choreographed by the one and only, Mandy Moore! She is one of my favorite choreographers ever! I always love her pieces on SYTYCD and it was amazing when I found out I got the job because I had only danced with her once before. That time was in a class situation so this was the first professional job when I have worked with her. If you want to be super impressed, look at her page here. Mandy Moore is AWSOME. I have never had so much fun on a job.

To think last year at this time, my blog post was about a huge star (the sun) whose solar flares are its dances. Now I will be Dancing with the Stars! For most, being on the show will be a solar flare. But for me, it will be epic!

We rehearsed Wednesday and Thursday, and we will continue to rehearse Saturday and Sunday before the live show in front of the studio audience on Monday the 17th. Our piece airs during the two hour finale of the show on November 24th at 8 Eastern and Pacific, 7 Central.

We learned the dance in multiple sections, but that’s pretty much all I can tell you about the dance itself because I’m not supposed to give away any details. I apologize. But, I can tell you about all the people that are dancing with me. I knew most of the girls, but there were a few that I didn’t. The dancers included Aria Terango, Lucy Vallely, Soni Bringas, Jordyn Jones, Abigail Vargas, Ruby Turner, Simrin Player, Trinity Inay, Rachel Fee, and a few others (sorry that I do not know everyone’s name yet).

So that concludes this blog post. Everyone make sure to watch me on the season finale of Dancing with the Stars! Also if you haven’t already, subscribe to my blog and my YouTube channel for even more fun!

Many Thanks to Camille Catteano and her mom (my second mom) Maureen Catteano who took me to the audition while my parents were out of town on a job.

Special thanks to Johnna Clark and my team at DPAC who gave me a pass this weekend. I love you all and wish I was not missing choreography weekend. You are all so supportive of me. #faithnotfear

Huge thanks to my agent – Shayna Brouillard and the Dance Department at Clear Talent Agency in Los Angeles for putting together this great gig. Dancing With The Stars Stage Dancing With The Stars Camera