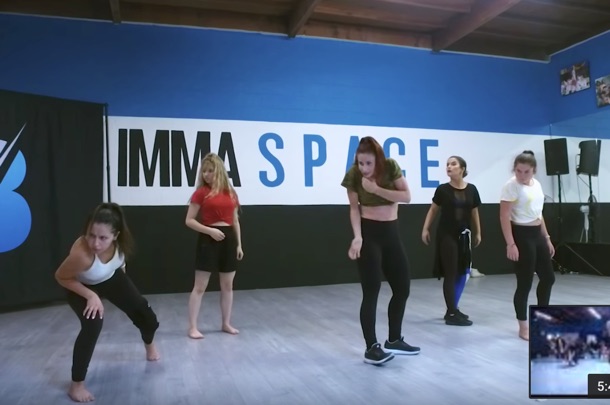 By sparkleslund | Dance, Stuff I Like, Uncategorized, Work | No Comments

Janelle Ginestra Crushes This Choreo to Marian Hill – Down

If you follow me on Instagram, you know that I was training last week in Los Angeles. Every Monday we have IMMABEAST company class, and the rest of the week I took class at Millennium and IMMASPACE. IMMASPACE has really begun to attract some of the hottest choreographers on the planet that are innovating in dance. (download IMMASPACE app here to see class schedule). It has become a special place to train, not only because of the great choreographers, but the IMMASPACE itself has developed a special character. Most of all, the general dance public does not know about IMMASPACE yet – so the dancers that it attracts for training are typically a combination of IMMABEAST dancers and that choreographers’ biggest fans. The room caps out at 60 dancers, so there is lots of room to move.

Of course, when you think of IMMABEAST, you think of Willdabeast. But when you dig in, you see that IMMABEAST is as much about Will Adam’s fiancé Janelle Ginestra as it is Will. They are truly partners in everything. Like yin and yang. It is outstanding to witness. Each of them make powerful contributions to the dance industry in so many ways, but most importantly – they help dancers like me to get better and to focus on the things that will help drive success both personally and professionally.

Stylistically, I think that my style of dance is closer to Janelle’s than it is to Will’s. Ginestra blends the hard-hitting style of hip-hop with contemporary movements of powerful female bodies. You feel like a strong woman when you dance to Janelle’s choreography. Some hip-hop is so strong that it drops the femininity that women bring to dance. Janelle’s style lets girls be girls, and lets boys be boys. I love it.

Marian Hill is actually two people: Jeremy Lloyd and vocalist Samantha Gongol. The two hale from Bryn Mawr Pennsylvania – outside of Philadelphia. They met in junior high, and really became relevant artists in 2015 when the release of their single “One Time,” leading up to their debut album; Once Act in 2016. Apple gave them a big boost when they debuted their iPhone 7 + AirPods to this song, “Down” during the Atlanta Falcons and Seattle Seahawks playoff game. The commercial featured Lil Buck gravity dancing to “Down.” The combination of Samantha’s iconic voice with the creativity of Jeremy’s electronic musicality makes for excellent dance music. (If you need some good solo music – check this out. If you have not seen the YouTube video for “Down,” you gotta check it out .

The director for the video was Jack Begert of Psycho Films  – produced by Sam Canter and Tyler Sobel-Mason. What they did with the elevator was truly outstanding. Awesome work in post production too! Graphics editing was WOW!

Janelle Ginestra did an outstanding job developing choreography for the song. Its quirky, artistic, and both hard and soft at times. There is a lot of intricate movement with hands, and great opportunities to play with the choreography as a dancer. I loved the class and am so excited that Janelle featured our group in her class video.